In this area, boulders were deposited by retreating glaciers in an unusually high concentration. On this half-hectare are about 80 huge rocks.
This creates an interesting landscape and many people have come to study these boulders. This place is named after the first scientist to write extensively about this area. His name was Gregor Helmersen and he studied at Tartu University in southern Estonia. He then became a professor at the St. Petersburg Science Academy. He came to Hiiumaa in 1871 and 1879 to conduct his research work. Later research aided by satellite photography would show that the Paluküla Heights are actually the rim of an ancient crater created by a huge meteor which struck this area around 450 million years ago. The crater is about 4 kilometers in diameter and the entire town of Kärdla lies inside its rim.
The local legend about this place says that the boulders are all that remains of an attempt by the Devil to lay waste to Pühalepa Church. As was mentioned earlier in this text, the Devil was strongly opposed to the idea of a church being built in Hiiumaa. One day, he filled his pockets with heavy rocks and began to walk towards the church, intent on destroying it once and for all. But, the guardian angel of the church intervened by making the Devil become lost in the forest. Finally, the Devil became tired and decided to lie down to rest. When he awoke it was dark and when he stood up his pockets broke and all of the rocks fell out. Since it was so dark, he decided that he would come back the next day and try again. He went home, leaving the rocks behind and because he didn't know where he was it took him a long time to get home and the next day he couldn't find his way back. So, the boulders stayed here and now are a permanent part of the landscape. 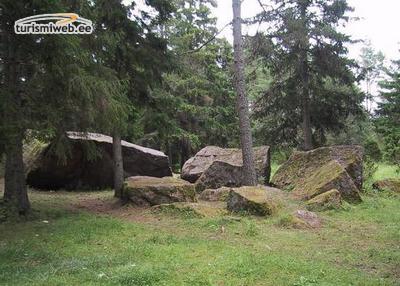 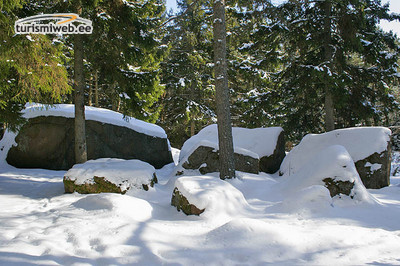