Tamme-Lauri oak is the thickest oak in Estonia. Its girth is 130 centimetres, height eight metres and it is 680 years old. The hollow in its trunk is filled with an iron framework and eight tons of concrete. Before the hollow was filled there was space for up to seven people. As our greatest primeval tree, Tamme-Lauri oak also adorns the ten-kroon note.
Tamme-Lauri oak got its name from Tamme-Lauri farm, which in turn got its name from the oak itself and the spirit that was once thought to inhabit the oak, making mischief and bringing bad and sometimes good luck. It was supposed to be the spirit of fire called Laurits who was said to have burnt down Urvaste schoolhouse several times.
Common oak is one of our most powerful and well-known deciduous trees. It grows in nemoral forests, in the woods on flood planes, wooded meadows, alvar forests, dry nemoral pine forests, gardens, parks, and boulevards. In a thick forest stand oaks have straight trunks with branches starting high and pyramidal crowns. Oaks growing in the open have thickset trunks and branchy crowns that start low.
The oak, with its royal stature and long life, is called the king of trees. When an oak is of full age, its roots may reach as deep as ten metres into the ground. Two characteristics of the oak ensue from this - as it is firmly grounded it does not fear storms and reaching deep into the ground it never suffers from lack of water. The oak´s resilience in draughty conditions is proven by the fact that it is one of the few species of trees that can grow in the thin, rocky, and drought-parched soil of our limestone areas. Although oaks do not fear drought, they still prefer a fertile and deep soil.
Oak leaves are thick and leathery like the leaves of some evergreen tropical plant, found here only in greenhouses. The oak leaf is the symbol of Estonian nature conservation. The bark of a young oak tree is smooth, shiny and olive brown, while the bark of older trees becomes greyish and rough. Young shoots that the oak grows two or even tree times a year, are reddish brown. The buds are egg-shaped, covered in many scales.
The oak`s fruit is a one-seed acorn. Every acorn ripens in a cupule, which looks like a little cup with a rough surface. A ripe acorn is light brown. It has a smooth shell, pointed at one end and with a disc at the other end with which it is attached to the cupule. Acorns are food for the badger, the squirrel, the bank vole, the wild boar, the roe deer, and the jay. The jay spreads acorns, unwittingly ensuring the growth of new oak trees. Acorns are also fit for people to eat if soaked in cold water for 24 hours. Soaked acorn cores are dried, ground and can then be baked into a cake.
There is an old saying about oak timber: "Oak is the peasant`s iron". Some of the most fundamental parts of windmills were made of oak and the block that supported the anvil in a smithy was also made of oak. Most oak trees, however, were used in shipbuilding. 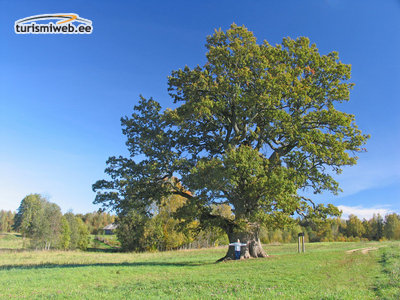