The church was built at the beginning of the 16th century, following the initiative of the archbishop of the Saare-Lääne Episcopate. This is commemorated with a stone coat of arms positioned above the western portal. This is typical of the renaissance tradition of emphasizing the personality of the church. For years the new church was referred to as the church of Orgas, after the archbishop Johannes III Orgas.

The first church was without a tower and choir (the first records date back to 1312). It is not known whether the new church was an expansion of the old one or was it simply built on the same site.
The single-naved church integrates the choir and the hall. In the interior the zones for the public and the clergy are clearly marked with a wide low arch. A vestry attached to the northern wall and the western tower indent the monotonous exterior. The easternmost of the three vaults now serves as a choir.
During the construction of the northern portal an epitaph with the coat-of-arms of the bishop was placed above the entrance. Beneath the symbols of the bishop – miter with crossed crosiers – there are two coats of arms. The first is the coat of arms of the bishopric, with the central figure of an eagle, and the second one belongs to the family of the bishop.
The original exterior differed from the one we see now mainly because of the missing windows on the northern side. The church also served as a fortification during war, and for that reason the existing windows on the southern side were narrower. The exceptionally small eastern window and the rounded western window give an idea of the medieval appearance of the church.

During the middle of the 19th century the church received its contemporary appearance. A tower was added, the western wall got windows and the vaults that were destroyed were replaced with a wooden ceiling. A christening stone, from approximately 1300, is the oldest item preserved in the church. The 18th century altar is moderately decorated. The carved figures on the altar are attributed to Christian Ackermann, one of the most famous woodcarvers of the period. 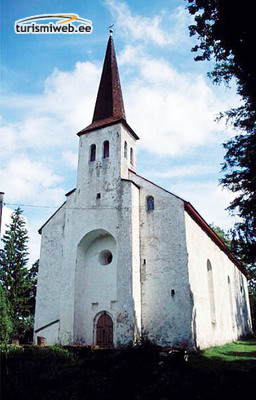 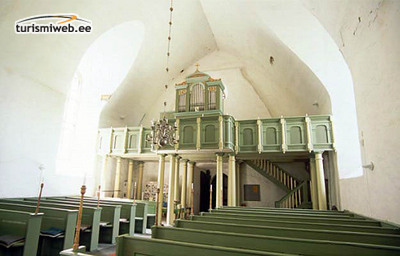 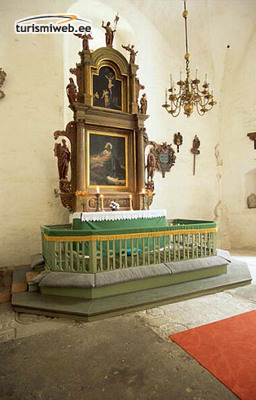 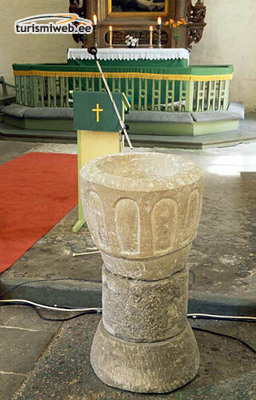