The St. Nicholas' Church, consecrated to merchants’ and seamen’s patron St Nicholas, is architectually one of the most integral and harmonious medieval churches in Estonia. Its history goes back to the 13th century – it is assumed to have been founded around 1230 by German merchants. While Tallinn was still unfortified, the church with heavy bars for closing the entrances, loopholes and hiding places for refugees served also military purposes. When the fortifications around the town were completed in the 14th century, the St. Nicholas' Church lost its defensive function and became a typical medieval parish church.

In the 15th century large-scale reconstructions, in the cause of which the choir and the three-aisled main body got their present appearance, were undertaken. The Baroque spire with airy galleries was raised higher stage by stage through several centuries. During the Soviet air-raid on March 9, 1944 the St. Nicholas' Church and the buildings surrounding it were severely damaged.

The most precious art treasures survived merely thanks to their timely evacuation from the church. Hence, besides Baroque epitaphs and other masterworks of carving, a remarkable collection of Renaissance and Baroque chandeliers, as well as the 14-17th century tombstones covering the floor of the Chapel of St Matthew (later St Anthony), but also such invaluable rarities from the 15–16th centuries as the high altar, the initial fragment of the famous painting Danse Macabre and the altar of St Anthony survived.

The high altar of the St Nicholas' Church was made between 1478–1481 in the workshop of Hermen Rode, master from Lübeck. Paintings on the outer flanks of this double-winged altar depict the life of St Nicholas, the central part and the unfolded wings expose over thirty polychrome wooden sculptures forming the so-called gallery of saints.

Danse Macabre - painting by the Lübeck master Bernt Notke – depicts the inevitable transcience of life, the figures of Death taking along the mighty as well as the feeble ones. Only the initial fragment, remained of the original painting with up to 50 figures representing all the medieval social positions, can be seen in the St Nicholas' Church. It is most likely the painter’s renewal of an analogous painting in Lübeck dating from 1461, accomplished at the end of the 15th century.

The altar of St Anthony or the Altar of Christ's Passion was made at the beginning of the 16th century in the Netherlands by the Brugge master Adrian Isenbrandt and later complemented by Michel Sittow, a Tallinn artist of all-European renown. Also the altar of Mary, made in 1495 by an artist known as the author of the "Lucia Legend", as well as the altar of the Holy Kin (the so-called Brussels altar) from about 1490, made in Jan Borman’s workshop of carved altars in Brussels, are displayed in the church.

Since the end of year 2002 unique 350 years old decorative screen of Bogislaus Rosen's chapel carved by Frans Hoppenstätt is also opened for visitors.

The ruined church was restored and inaugurated in 1984 as a museum-concert hall, where the collection of medieval art of the Art Museum of Estonia is exposed, and also organ and choir music concerts can be enjoyed regularly. 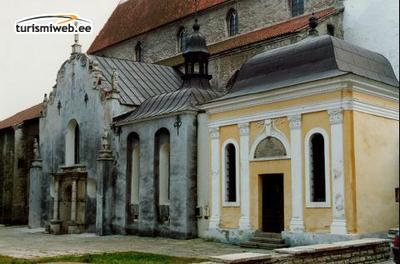 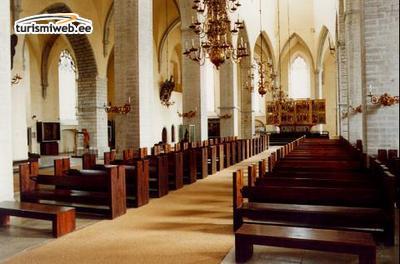 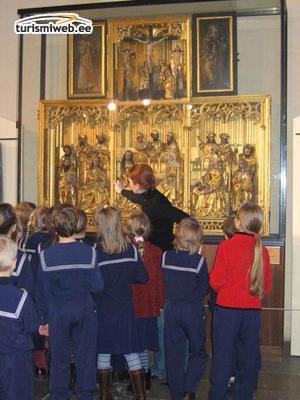 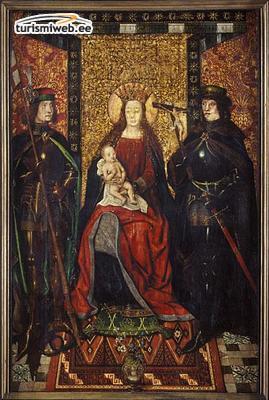 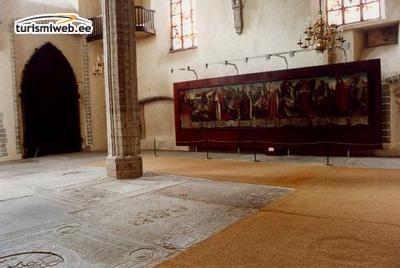