The island of Abruka lies off the southern coast of Saaremaa, approximately four kilometers from the port of Roomassare. It is 8.78 square kilometers in size. Abruka is the site of a Central European-type of broadleaf forest. It is considered rare because, here we are, in Northern Europe. Abruka also has two lighthouses, one a metal construction and the other of reinforced concrete. Both were built at the beginning of the last century, i.e. around 1920. Needless to say, there is also lots of beach. Abruka was first permanently settled in the Middle Ages, when the Bishop of Western Estonia and the Islands established a horse breeding farm there. The highest population on the island has been 150. Today, there is a permanent population of around thirty.
There are some smaller islets off the coast of Abruka, namely Vahase, Kasselaid and Linnusitamaa (translation for the last one: Bird Poop Island).
The broadleaf forest is inviting to anyone who has even a slight interest in nature. It covers 92 hectares and is a relic of the times when the weather was warmer in our latitudes. The lindens, birches, maples, oaks, elms and ash trees rise to 30 meters. They are extensively covered with various mosses and lichens.
Abruka is definetly worth at least a day trip. Pack a lunch and take a boat from Roomassaare. There is scheduled service in the summer and a boat can be arranged at other times. A store supplying basic foodstuffs operates in the summer and there are camping facilities available. 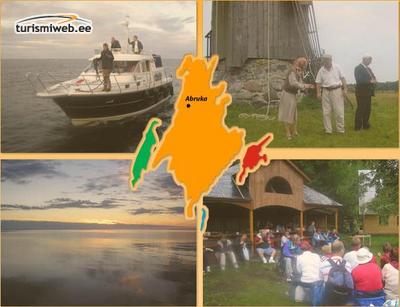