At the very northwestern tip of Saaremaa, as the westernmost addition to the peninsula of Tagamõisa and north of the island of Vilsandi, is one of the more unique and youngest peninsulas - Harilaid.
The peninsula of Harilaid is low-lying, its highest point barely reaching five meters above sea level. Harilaid covers an area of 3.62 square kilometers. Its shoreline is indented by many shallow bays and coves. In the middle of the peninsula there is the Laialepa Lake. It is connected to the sea by a small stream. There are other small lakes on Harilaid.
The backbone of Harilaid is apparently an underwater bluff that developed during the Ice Age. It began its rise from the sea about one to two thousand years ago. First, small islets appeared from the water, as the land continued to rise, these islets connected to form the present peninsula. The peninsula is still rising from the sea, at the rate of 2.5 millimeters per year. 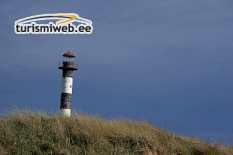