A monument to writer Juhan Jaik. He was born in Sänna, Võru County.

The raven`s stone, as lots of people already know, is a stone that gives everything to a person who finds the stone and is wise enough in using it. It was an eternity ago when I was a shepherd boy and a shepherd boy called Junts was my neighbour. It was he who told me that once he had found a real raven`s stone.
The story goes as follows. Junts found a raven`s nest high up in the top of a pine growing near the pasture. Junts had heard earlier that sometimes ravens, instead of laying eggs, lay in the nest a raven`s egg that is like an egg but can fulfil all your wishes. So Junts also hoped to get such a stone. But one must not pick up the stone immediately. The stone has to be picked up exactly after hatching time. Well, Junts climbed up to see the nest. The nest had three eggs with one heavier than the others. Junts rubbed the stone and wished to have a new trouser button to replace the one he had lost, and at the same moment the trousers already had a new button. So it was clear to Junts that the stone was the real raven`s stone. Junts was very happy, gave the stone to his mother and said that it was not quite a mature raven`s stone. He said one could create only small things with it. Then mother had held the stone in her palm, rubbed it and said: "Stone, stone, if you give me everything you can at one time, we shall leave you in peace thereafter." A few handfuls of gold coins immediately appeared in mother`s palm and the stone disappeared as if it had never existed. 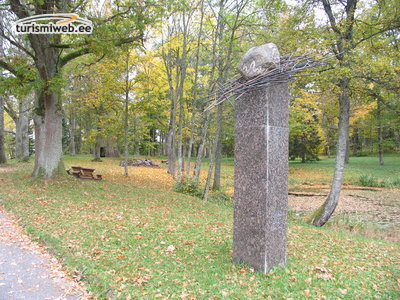