Historical Ship to Return to Tallinn for July Festival

A four-masted bark named after a 19th century world circumnavigator will be the most distinguished visitor at the Tallinn Maritime Days.

After an absence of 20 years, the Krusenstern is returning to its onetime home port of Tallinn.

The idea to call the ship home for one of the major events marking the European Capital of Culture year came to organizers in 2008.


"We found that it would be a distinguished present to the people of the city and to all visitors," says Deputy Mayor of Tallinn and head of the organizing committee, Taavi Aas.

The capital of culture foundation and the current owner, the Baltic State Academy of the Russian Fishing Fleet, reached agreement on the ship's return.

The ship was built in 1926 in Hamburg and originally was named Padua. Before World War II, the ship made 15 long voyages between Australia and Chile, and the one accomplished in the least time was a trip from Hamburg to Australia via Chile that took eight months and 23 days.

After surviving the war, the bark went to the Soviet Navy and was based in Riga. It is named after Estonian-born Adam Johann von Krusenstern (1770–1846), the first explorer in the Russian Empire to sail around the world.

After some time in Estonia, it has been based in Kaliningrad since 1991.

The ship will arrive in Tallinn at midday on July 15 and be open to the public at various times during Maritime Days. 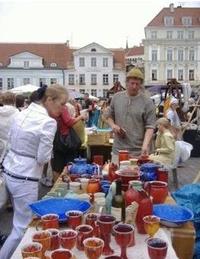 The journey back in time to the Middle Ages to discover 500-year-old Reval begins on 7 July at Viru gates, and upon reaching Town Hall Square it will bring a Hanseatic artisans’ market to life. Town hall musicians, travelling minstrels, dancers, troubadours and contortionists will...читать дополнительно