The e-zine Flavours of Estonia has ranked Telegraaf’s Tchaikovsky as Estonia’s third best restaurant in the fine dining category in its annual 50 Best Restaurants in Estonia Award. We are particularly flattered for two reasons: First, Flavours’ jury in the fine dining category includes distinguished international jury members from the 50 Best Restaurants in the World Award. Second, its methodology employs surveys of key local restaurant employees (chefs, sommeliers, restaurant managers) whose sharp eyes and critical tongues are the most difficult to please! Read more about it here or, even better, book a table at Tchaikovsky and experience it yourself (reservations +372 6000 610).

Telegraaf proudly raises our biggest glass to F&B Manager, Mr. Kristjan Peäske. Kristjan just returned from Vilafranca del Penedès, Spain, as first prize winner in the examination of the 22nd Annual Miguel Torres wine course. Kristjan was presented his award by Mr. Torres himself whose surname has been linked with wine for more than three centuries. Of the 17 participants from all over the world—sommeliers, wine teachers, wine journalists, wine sellers—Kristjan scored the highest on the final examination administered on May 27th.

Last March, Kristjan was named Best Estonian Sommelier 2010, and in 2009 he was named Best Sommelier in the Baltic States. We’re pleased for him of course, but what we really value is the boundless enthusiasm that is behind his awards. As more than a few guests have pointed out, Kristjan’s enthusiasm is contagious.
Please join us in raising a glass to Kristjan Peäske. And if Kristjan picked what’s in your glass, then you’ll enjoy it even more. Well done, Kristjan!

We’re pleased to announce that the travel portal Expedia has named Telegraaf to its Insiders´ Select list of best worldwide hotels for the second year running. The list is assembled using over one-half million traveler reviews of over 114,000 hotels and resorts worldwide. This year, reviewers awarded Telegraaf 98.6 points out of a possible 100. Of course, we like good reviews, but the most important review is yours, so always let us know what we’ve done well or how we can improve. (A score of 98.6 is nice, but we’d like to have the remaining 1.4 points.)

Skin to Match the Summer

Receive a complimentary Elemis Lime & Ginger Salt Glow body scrub for only 21 euros when you book either a Ceremony of Sun (lime and ginger salt scrub and application of Total Glow Self Tan moisturizer) or an Elemis men’s facial (includes hand and arm massage). Both treatments offer a wonderful transition to the relaxed atmosphere of summer.

Every several months we choose one staff member to serve as Telegraaf’s ambassador to the world. This season’s ambassador is Ms. Karin Tani, our Reservations Manager, who was recommended by both guests and fellow staff members. While the position has no diplomatic perks (Ms. Tani must still pay her parking tickets), the ambassador does receive a badge, diploma, and not least of all, a monetary bonus. Congratulations, Karin! 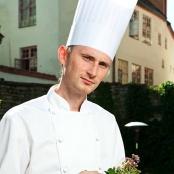 Welcome, Chef Vladislav Djatsuk! Vladislav first stepped into a kitchen when he was 16 years old. He was immediately dazzled by the ability of the brigade of chefs to work as one. He hasn’t left the kitchen since, having worked in France, Sweden, Denmark, Finland, and his home country...läs mer 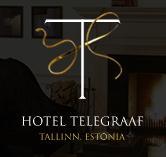 Telegraaf has the Baltic`s Top Sommelier Congratulations to our Food & Beverage Manager Kristjan Peäske who was recently crowned Best Sommelier in the Baltic region. Kristjan took first place at the Baltic Sommelier Vana Tallinn Grand Prix 2009 competition in Riga on the 23rd and 24th of...läs mer